Targu Mures is a city in Mures county, in the region of Transylvania. An alternate spelling of its name is Tirgu Mures, and is often abbreviated Tg. Mures. The city was first documented in 1332 under the Latin name Novum Forum Siculorum. In 1405, the King of Hungary Sigismund of Luxembourg granted the city the right to organize fairs, and in 1616 the city changed its name to Targu Mures (targ mean "market" in Romanian). The city received a major boost to its social and economic life when it became home to supreme court of justice of the Principality of Transylvania in 1754. Avram Iancu, the leader of the 1848 Romanian revolution in Transylvania, was a young lawyer in Targu Mures before engaging in the fight for the rights of Romanians living in Transylvania. The 2002 census was the first to show the Hungarians as a minority. The municipality of Targu Mures is officially bilingual, with both Romanian and Hungarian languages being recognised officially and used in public signage, education, justice and access to public administration. 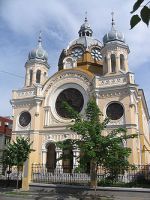 Targu Mures offers some places to visit, such as the Cultural Palace, built between 1911-1913, of which the most visited part is the Mirrors Hall, the City Fortress with the reformed church inside, built between 1602 and 1658, the Roses Square in the center of the city, or the Teleki Library, built between 1799-1802, one of the richest Transylvanian collections of cultural artifacts.

Targu Mures is well connected to major cities in Transylvania and Moldavia by roads and railways, and is served by Targu Mures International Airport, which provides both domestic and international flights.

Targu Mures has three local transport operators, connecting the city's main areas and the tourist attractions. There is also the option to rent a car using services offered by EuroCars.

Due to the economic boom of the recent years and the increasing number of tourists, Targu Mures has developed many accommodation offers, such as hotels and hostels, or by renting short and long term apartments.

Finding the appropiate dining place in Targu Mures isn't difficult. A great number of restaurants and bars are available, with many of them serving traditional Romanian specialties. There are also fast foods available, as well as country specific restaurants.

Targu Mures has several shopping centres available throughout the city, and there are also available plenty of places to buys souvenirs, the most common met being related to Romanian folk.

Apart from the ocasional events that take place in Targu Mures, there is always a theatre or a cinema to go to for entertainment, as well as art exhibitions. The nightlife in Targu Mures has a lot to offer on its own. Targu Mures has something for everyone, like bars and clubs, discos, or even casinos.