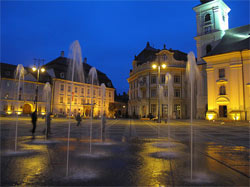 Sibiu is an important city in Transylvania, and is situated near the geographical centre of Romania, about 20 km from the Fagaras Mountains. Sibiu was the largest and wealthiest of the seven walled citadels, known in German as the Siebenburgen, built in the 12th century by German settlers. In the 14th century, the city was already an important trade centre, and from the 1860s became the Metropolitan seat. Sections of the medieval wall still guard the historic area of the city, which, like Sighisoara and Brasov, has a distinctly Germanic feeling. Sibiu has two town levels: the Upper town, containing most of Sibiu's historic sights, which was the wealthier part and commercial outlet, and the Lower town, which served as the manufacturing area and is bounded by imposing city walls and defense towers overlooking the river Cibin that runs through Sibiu. In 2007 the city was the European Capital of Culture, together with Luxembourg.

The city of Sibiu and its surroundings are one of the most visited areas in Romania, holding one of the best preserved historical sites in the country. Many of the medieval fortifications have been kept in excellent state, and from 2004 Sibiu's old centre has become a UNESCO World Heritage Site. The historical centre includes the Great Square, Huet Square, the beautiful Passage of Steps connecting the upper town to the lower town, the well-known Bridge of Lies, Goldsmiths� Square and the Small Square. Sibiu and its surrounding area have many significant museums, with 12 institutions housing many collections of arts, archeology or history. The city also lies close to the Fagaras Mountains, a very popular trekking destination, and the Paltinis resort, a popular winter holiday destination.

The geographical position of Sibiu makes it one of the most important transportation hubs in Romania with important roads and railway lines passing through it. A highway is planned to link Sibiu with the western border through Arad. The city has three rail stations, with numerous InterCity trains connecting to other major cities in Romania, such as Cluj-Napoca, Brasov, Craiova, Timisoara and Bucharest. Sibiu is also an important hub for national and international bus links, with the biggest passenger transporter in Romania based here. Sibiu also has an international airport with direct connections to Munich, Stuttgart, Vienna, Madrid and Bucharest. To get to the main city from the airport, you could use the Sibiu airport transfer service.

Sibiu's local transport system operates one tram line to the nearby village of Rasinari, 5 trolleybus lines and 25 bus lines. There are many taxi companies in Sibiu, with all of them having the same fares as imposed by the city council regulations. Also you could use the car rental services offered by EuroCars.

Due to the economic boom of the recent years and the increasing number of tourists, Sibiu has developed many accommodation offers, such as hotels and hostels, or by renting short and long term apartments.

Finding the appropiate dining place in Sibiu isn't difficult. A great number of restaurants and bars are available, with many of them serving traditional Romanian specialties. There are also fast foods available, as well as country specific restaurants.

Sibiu has several shopping centres available throughout the city, and there are also available plenty of places to buys souvenirs, the most common met being related to Romanian folk.

Apart from the ocasional events that take place in Sibiu, there is always a theatre or a cinema to go to for entertainment, as well as art exhibitions. The nightlife in Sibiu has a lot to offer on its own. Sibiu has something for everyone, like bars and clubs, discos, or even casinos.