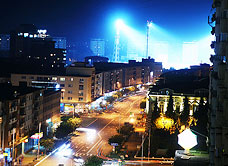 Bacau is situated in the region of Moldavia, at the foothills of the Carpathian Mountains. The city was first mentioned in 1408, during the rule of Moldavian Prince Alexander the Good. The region being very suitable for raising cattle, a theory suggests that the etymology may have a Slavic origin in the word byk, meaning "bull". The term rendered into Romanian alphabet as bâc, and was probably the origin of Bâcău, which is mentioned in several medieval documents. During World War I, Bacau was the headquarters of the Romanian Army after the occupation of Bucharest by the Central Powers.

If you get to Bacau, make sure you don't miss the Precista Church, built by the son of Stephen the Great at the end of the 15th century, or the ruins of the Princely Court in the vicinity. There is also the modern art Roman-Catholic Cathedral, the biggest church in Moldavia with over 70 metres height. The Ethnographic Museum in Bacau displays the ethnographic areas of the region, while the History Museum houses an important collection of antique objects from the ancient Dacia. The exhibition "Saloanele Moldovei" and the International Painting Camp at Tescani, near Bacau, reunite important plastic artists from Romania and from abroad. Around Christmas every year, a Festival of Moldavian Winter Traditions takes place reuniting folk artists from all the surrounding regions.

The city is served by Bacau International Airport, providing direct links with Bucharest and Timisoara, and international links with 11 cities in Italy and Germany. To get to the main city of Bacau, you could use the airport transfer service. The Bacau Railway Station is one of the busiest in Romania, being connected to the main Romanian cities, and is also a major transit stop for international trains from Ukraine, Russia, and Bulgaria. Bacau links to the Romanian capital, Bucharest, to the south, and the cities of Suceava and Iasi to the north. Another European route provides an important access road to Transylvania and the city of Brasov.

The local public transportation service consists of modern buses, operating more than 20 bus lines. There is also available a private association that offers public transport services, as well as several authorized taxi companies. Pay attention to the private taxi drivers, who often use higher tariffs. Also you could use the car rental services offered by EuroCars.

Due to the economic boom of the recent years and the increasing number of tourists, Bacau has developed many accommodation offers, such as hotels and hostels, or by renting short and long term apartments.

Finding the appropiate dining place in Bacau isn't difficult. A great number of restaurants and bars are available, with many of them serving traditional Romanian specialties. There are also fast foods available, as well as country specific restaurants.

Bacau has several shopping centres available throughout the city, and there are also available plenty of places to buys souvenirs, the most common met being related to Romanian folk.

Apart from the ocasional events that take place in Bacau, there is always a theatre or a cinema to go to for entertainment, as well as art exhibitions. The nightlife in Bacau has a lot to offer on its own. Bacau has something for everyone, like bars and clubs, discos, or even casinos.