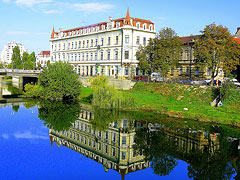 Oradea lies in the Crisana plain, very close to the western border of Romania, and it is famous for its thermal springs. The Crisul Repede river crosses the city right through the centre. Oradea is one of the more prosperous cities in Romania, mainly due to its location on the Hungarian border, making it a gateway towards Western Europe. The first documented mention of the city was in 1113, a small century castle under the Latin name Varadinum. In the 18th century, the city was planned in Baroque style by a Viennese engineer, and many landmarks were erected such as the Roman Catholic Cathedral and the Bishop's Palace, presently the Museum of the Crisland. 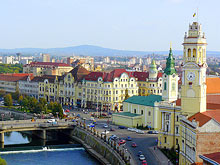 Oradea's architecture is a mix between modern era and beautiful historical buildings, remnants of the era when the city was part of Austrian-Hungarian Empire. Oradea is remarkable for its many Baroque buildings and rich collection of Art Nouveau architecture. After the economic boom of the recent years, many historical buildings in the city were restored and currently the city gives off a very historic and well-maintained feel. Of the most impressive attractions worth visiting in Oradea there are the Baroque Palace - nowadays known as the Museum of the Crisland with a collection of fossils of dinosaurs and birds, the Baroque Cathedral - the biggest in Europe, Oradea's Fortress with a pentagonal fort, or the Church with the Moon - a unique church in Europe, with a type of astronomical clock depicting the phases of the moon. A major attraction outside the city is the Felix Baths health spas, accessible by bus.

How to Get to Oradea

Due to its location on the western border of Romania, Oradea is a major access point to the country either by road or by railway. The city is also served by Oradea International Airport, with flights to other Romanian cities, as well as some cities in northern Italy. To get to the main city of Oradea from the airport, you could use the Oradea Airport Transfer service.

Oradea's public transport network is made up of three tram lines and ten bus lines. To get around the city there is also the option to rent a car using services offered by EuroCars.

Due to the economic boom of the recent years and the increasing number of tourists, Oradea has developed many accommodation offers, such as hotels and hostels and the option of renting short and long term apartments.

Finding the appropiate dining place in Oradea isn't difficult. A great number of restaurants and bars are available, with many of them serving traditional Romanian specialties. There are also fast foods available.

Oradea has several shopping centres available throughout the city, and there are also plenty of places to buy souvenirs at, the most common being related to Romanian folklore.

Apart from the ocasional events that take place in Oradea, there is always a theatre or a cinema to go to for entertainment, as well as art exhibitions. Nightlife in Oradea has a lot to offer on its own. Oradea has something for everyone, like bars and clubs, discos, or even casinos.