Cluj-Napoca is the fourth largest city in Romania, and is one of the most important academic, cultural, industrial and business centres in Romania. The city lies in the centre of the Transylvania region and is as old as AD 106, when the Roman Empire conquered Dacia and established the settlement Napoca. However, the first written mention of the name Cluj was in 1213 under the Latin name Castrum Clus. In 1956, the Hungarian Revolution led to the Romanian authorities "unifying" the local Babes (Romanian) and Bolyai (Hungarian) universities. Hungarians remained the majority of the city's population until the 1960s, when Romanians began to outnumber Hungarians, due to the influx of population that was a consequence of the policy of forced industrialisation of the city. On October 16, 1974, the city celebrated 1850 years from its first mention as Napoca, and the government changed the name of the city by adding "Napoca" to it. 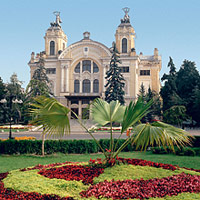 Cluj-Napoca has a number of landmarks and monuments, such as the 14th century Gothic style St. Michael's Church in Union Square, with the equestrian statue of Matthias Corvinus in front of it, or the Palace of Justice in the Avram Iancu Square. The city hosts the largest university in the country, Babes-Bolyai University, with its famous botanical garden situated in the vicinity of the centre. Beside this garden, Cluj-Napoca also has some large parks, the most notable being the Central Park, founded during the 19th century, and includes an artificial lake with an island, as well as the largest casino in the city, Chios.

How to Get to Cluj-Napoca

Cluj-Napoca has road, air and rail connections to major cities in Romania and Europe. The city is an important intersection in the European road network, being on three different European routes, and at a national level it is located on three different main national roads. The Transylvanian Highway, currently under construction, will link the city to Bucharest and to the western border of the country. The Cluj-Napoca International Airport is located 9 kilometres east of the city centre, and it is the fourth busiest airport in Romania. To get to the main city, you could use the Cluj Airport Transfer service.

Cluj-Napoca has a large internal transportation system, including bus, trolleybus and tram lines. There is also the option to rent a car using services offered by EuroCars.

Due to the economic boom of the recent years and the increasing number of tourists, Cluj-Napoca has developed many accommodation offers, such as hotels and hostels, and the option of renting short and long term apartments.

Finding the appropiate dining place in Cluj-Napoca isn't difficult. A great number of restaurants and bars are available, many of them serving traditional Romanian specialties. There are also fast foods available.

Cluj-Napoca has several shopping centres available throughout the city, and there are also plenty of places to buy souvenirs from, the most common being related to Romanian folklore.

Apart from the ocasional events that take place in Cluj-Napoca, there is always a theatre or a cinema to go to for entertainment, as well as art exhibitions. The city's nightlife, particularly its club scene, grew significantly in the 1990s, and continues to increase. While many discos play commercial house music, the city has an increasing minimal techno scene, and to an extent jazz/blues and heavy metal/punk.

Are you relocating to Cluj? You'll need an expat-friendly company or service to assist you with your move! Search our directory of relocation companies and services for removals to Cluj to find the right partner to help you to move in Cluj.